Today I’ve been siting at home feeling sick. Since I’ve not been able to do work on some of my To-Do’s, I decided to take this opportunity to look on the bright side.

Being home bed-ridden opens me up to doing something I’ve been wanting to do for a long while. Since I created my second blog, 1k Photo Challenge it has been seeing a steady rise in growth.

It wasn’t not really my intention to separate this blog from my Photo Journal blog, but I felt that the two blogs had vastly inconsistent formats that would not work as one. Fortunately, today has given me the opportunity to keep these blogs separate but still merge them under one unity.

So now, under both sites you will find each one of them linking to the other blog. For the Challenge List you can go under:

If you are unaware of what the 1k Photo Journal is about, check over here for why it was started. You can also check out some of the top posts from the site:

As we begun our descent the sun started to blare down. We built up more of a sweat on our decline trip from the West Bluff Trail then we did during our incline. […]Read more

Tomorrow I will be traveling north to run the Spartan Sprint then heading west to explore the area of Wisconsin.[…]Read More

This month I had the pleasure of joining the Minnesota Caving Club for my first caving experience. I’ve been interested in going caving since watching the film The Descent, right before all the cave-ins and death. It not only looked like a fun, new challenge, but would also be a different kind of hiking adventure.

Being a complete newbie to Caving, I was not sure what I’d need. I shot an e-mail to the club president who told me all I need to do is to dress in clothes I don’t mind getting dirty. Just to be safe, my girlfriend and I went on a trip to gather some helmets, gloves, headlights, and boots for our caving endeavor.

The club met pretty far south in Minnesota early in the morning. Since we were a good distance away from their meeting location we got up before dusk. Not being familiar with the southern part of Minnesota, we got a bit lost once or twice in the vast farmland that stretched for miles. We met up with John “The Cave-man”, president of the club. John guided us down a 2-hour trip towards Rochester where we traveled to a privately owned cave.We learned that we were traveling to several caves that day, all of which were owned by John.

The club itself consisted of a number of outgoing experienced cavers all very friendly to talk to. We also found that most of the equipment we did buy was completely useless for the cave, but the club had more than enough gear to spare. We spent little time above ground before going on our under ground tour down the cave.

Now, when I thought of caving, I had a different sort of idea of what I’ll be getting into. My only experience in caving was being guided through a Tourist Attraction of a cold environment that was extremely well lit. This caving experience was a whole another level than that tourist attraction. Shortly after getting into the cave we found ourselves in a cool damp area that was a complete blackout only lit by out head lights. The pathway was not the familiar flat terrain, but a rocky area where each step had to be taken with precision and caution.

During our tour, our guides, Anna and Trish, talked to us about certain caving techniques and information about how the cave’s structure formed.We got to some of the more unique area of the cave shortly into the tour. I was grateful to have skipped out on the fatty foods all this time, because we ended up spending a good chunk of time crawling on our stomachs through thin crevices to reach hidden rooms. Some of these crevices definitely had to involve some shimming, flexibility, and a good chunk of upper body strength. Especially when some of the holes we  crawled through lifted our legs completely off the ground.

Since it was Spring a few of the cave pathways were not taken because of flooding. However, this only opened up the opportunity to explore other structures that required a

different kind of traversing to get through. The second half of our caving adventure was on the higher ground. This was definitely the time to learn if you’re afraid of heights since much of the exploration involved shoving ourselves in between cave walls 20 feet above the ground and carefully stepping our feet to find the ladder mounted between the rocks.

The entire adventure did not feel extremely physical, but the four of us, all young and fit, were sweaty and out of breath by the time we finished. After we settled for lunch we took above ground to explore the creek and smaller caves around the area. Unfortunately for us, my girlfriend and I had to cut it short due to a family emergency. Although, both of us agree that the entire experience was definitely a memorable one, making it my top pick for the 1K Photo Challenge day of the month. 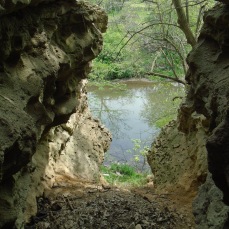 A few weeks ago, Ransom Patterson, writer on College Info Geek, wrote an article about the importance of keeping a journal. Ransom found that since he started a journal he was able to develop a log that allows him to reflect on his life and see how he has developed over time.

Now when Ransom was talking about keeping a journal he mention how it’s more ideal to keep a daily journal rather than documenting one whenever you feel like it. This not only builds strong journaling habits, but also is a great way to express your thoughts and feelings on that day.

As some of you are aware, my Challenge List is a journal documenting milestones achieved in my life. When I first read about keeping a daily journal I figured doing it online only made sense for me. Although, when I look through all of my previous blog entries I found that a lot of them are formatted in a way that takes a while to write up. I felt that creating a daily journal here will not only require me to write a lot each day, but it will also take away from the entries that are there to reflect on each goal achieved on my list.

So, with that being said, I decided to create an online photo journal. A photo journal not only allows me to document each day visually, but also gives me the ability to write very brief descriptions about my thoughts and feelings that day. This photo journal will document one photo that involved a progression/event that has significance towards my goals.Every 30 days I will be taking the best/memorable/eventful photo and writing a reflection of that day. The reason why I call it a “1k Photo Challenge” is because I felt I needed an overall goal to motivate me for updating my daily journal. Since I like challenges, I thought I’ll make one that requires me to journal once day, for 1,000 days.

I’ve started this project about a month ago and already it has been a positive way for me to look back and see how much I’ve grown in just a mere 30 days. I recommend everyone to start a journal of their own and start writing in it every day. It has been a very encouraging way to go out and find adventure in life. If you have created a daily journal give a comment below on where it can be found and how it has been an influence for you.